Ride bikes with us the last Friday of every month.

Critical Mass is a parade, not a race. Make sure you’re not leaving people behind. If the group starts to spread out, slow down and mass up! Critical Mass is a bicycling event held the last Friday of every month in hundreds of cities around the world. The purpose of Critical Mass is nothing formalized beyond the direct action of meeting at a set location and traveling as a group through city on bike. Come celebrate the freedom of traveling under your own power. We also hope to promote the bicycle as a viable means of transportation, expressing ourselves and have a lot of fun! The slowest rider determines the pace. The point is to be here, on our bicycles, enjoying the city. Although there is no set route, we will typically visit the popular areas in urban Kansas City. There are periodic breaks in between. Toward the end there is usually a stop where people can buy food and drink. 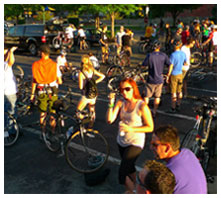 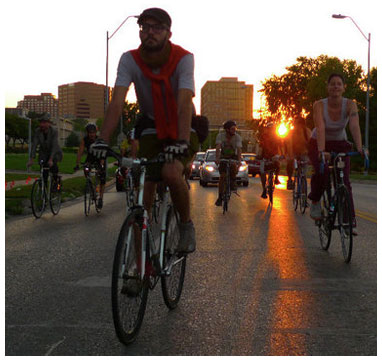 Check out the ride calendar!